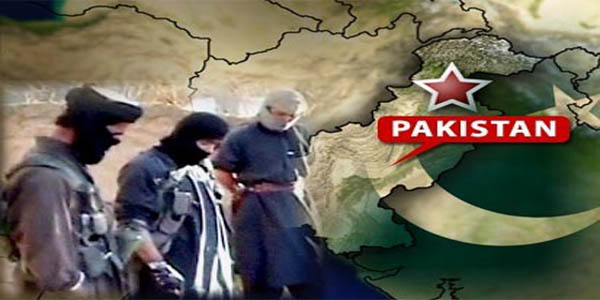 It was a very shivering news for the citizens of the country that a grandfather killed his grandchildren and thrown them from the roof top in presence of their mother who then killed by her father only for the protection of honour of the paternal family. The crime of the daughter was that she married with a man on her own choice not on the choice of the head of her family. The father was so vindictive that he waited five years to take revenge of his so called ‘honour’ with his daughter. He was very satisfied after taking his revenge with the grand children who were never been the part of the marriage of their mother on her own choice. He also killed two young men, the brother of the groom as they are responsible for dishonouring his prestige.

Ms .Shahnaz Tahir resident of Tara Singh a village of Depalpur, district Okara, Punjab Province was brutally murdered by his father and his henchmen in the mid of 22- 23 July night. Shahanz was tied in the knot of marriage with Mr. Tahir Sarwar five years ago. She eloped with Tahir which caused the stigma of her family in the society to stay away from stigma his father vowed to kill her by following traditional practices which are continued from decades.

Tahir after marriage left his home town along with his wife and lived in the other city because of fear of honor killing. After five years of marriage when they decided to visit their parents as they thought that their parents would now accept them and their innocent but when daughter and his son in law arrived at the house her father he opened the weapons on the family in the result Shahnaz his husband Tahir Sarwar and two children Adnan (Son) and Ramsha (Daughter), two brothers in laws, Mr. Zahid and Mr. Nawaz were killed. After massacre her father was very satisfactory and he opted to run away with the henchmen. As usual case has been filed in police station and investigation is going on.

In the recent months Pakistan has witnessed brutal murders of married several women in the name of honour and state remained as the silent spectator to curb the century’s old medieval traditions. Though, Pakistan has made a very categorical law which made the honour killing as the equivalent to crime of murder. Otherwise the killings in the name of honour killings were treated as a defensive crime to protect the prestige of the family.

It was generally said that the tradition of killing in the name of honour was a typical way of the land lords who do not want to divide their property in to the in-laws of the daughter. However with the passage of time the honour killing is has also extended to the marriage on choice. Rather than accepting the marriage of their daughters on her own choice realizing the burden is off loaded the paternal family resort to take it as the dishonouring the pride of the family and prefer to take law in their own hands. Such families know better the rule of law does not exist; therefore it was better for them to kill the women and get the protection from the same the law which in real sense has become an impotent and teeth less.

These types of cases are abundant and occurring in every corner of Pakistan each year. The fire of revenge ended with the loss of innocent lives. The reason was–marriage of own choice. Hundreds of women have been killed by their brothers, fathers, cousins and other blood relatives because of using their own rights.  Similar type of case occurred in last year when a girl chose a taxi driver as her life partner.

Another brutal murder was witnessed last year when Ms. Nargis from the Mardan, Khyber Pakhtunkha province, was tortured to death and her two children were killed by the family in honor killing. Nargis fall in love with a taxi driver, Mr. Ehtesham, when this news was exposed to her parents they brutally beaten her and kept her inside the house not allowing to go out. One day she was succeeded to elope from house and married with Mr. Ethsham later they tied in the marriage contract and lived a happy life. Nargis after long time went to her home town to see her mother but she was welcomed by her own family with severe. Her family members also beat ruthlessly her two minor children and when their thirst of revenge was not fulfilled then they thrown the infants from the roof top of home and Nargis was forced to see her children’s murder after that she was brutally beaten to death. case of murder was lodged by the family of girl against her husband and Police in this case arrested Mr. Ethsham and his brother and kept them inside the jail for four months and torured them but all the records disproved the involvement of Ethsham in this case but police forced the brother of Ethsham to give statement against his brother and accept that his brother as suspected in this case. Later the Judge released Ethsham and his brother and ordered for new inquiry.

Mostly every month many heart wrenching cases appeared from which some are registered and some are not. Murder of two teen age sisters Noor Basra and Noor Sheza by five gunmen in Chilas, GIlgit of Pakistan is one of them. They were killed because of dancing during the rain outside of their home along with other children and a video was recorded. Their dancing video was leaked in the town on which their half brother killed them for the restoration of family fame. The case was registered by the brother of the girls against their step brother Khutore and four other alleged.

Similarly in Dera Gazi Khan a woman was stoned to death because of having a mobile. This order was given by the feudal of the area and she was murdered in the name of honor as having a mobile means dishonor for the family. These barbaric actions are still alive in our societies and our state and law enforcement departments are calm on it.

This is an alarming situation for women of Pakistan where killing of the women along with their children in the name of honor is treated as it is no more an offence but is according to Islamic traditions. The society is being forced to denounce the marriage on the basis of choice of the couple. The Talibanisation is not only restricted to the terrorist activities or bomb blasts but its ideology against the freedom of women has seeped in the society with speed and those things which were not in Islam has become the principals of Islam. Therefore, the woman’s right to choose her own life partner is being dealt with medieval violence and customs. They are killed while settling the debts of families or married with aged people, to save the property they are married to the Quran or sell in money, and they are being killed if they raised their voice for their rights, killed if they seek divorce from husbands or the domestic violence, religious misunderstandings against as religion is used against them and many others.

Honor killings are propelled by many factors of the society including feudal culture, customs, traditions, absence of criminal justice system and fair trial, week judicial systems and a gender bias law enforcing agencies.

The landed aristocracy have a great influence in some areas of Pakistan where they hold Jirgas (illegal judicial system for the settlement of the disputes by elders) where generally decisions are taken against the women and minor girls are exchanged to settle the feuds.

The question here is that in the presence of law, which made it a criminal offence, the honour killings are shaping into very violent and brutal way. Still no one has been punished according to the law because of the absence of proper criminal justice system and witness protection law the killers get a good patronage from the police. By seeking legal protection from Sections 323 of Pakistan Penal Code (PPC); the perpetrators (family member/relatives) not only enjoy legal impunity but social redemption as well. The compensation through the Diyat (section 323 of PPC) the perpetrators got impunity through the law which allows to pay compensation to the victim to settle the dispute outside the court and during that phase the victims (the women) are intimidated, threatened or abducted to accept the meager amount as compensation and courts remain as silent spectators. In many cases the gender bias judges force the affected women to settle the crime outside the courts.

The said section of Diyat has also mentioned a minimum compensation of Rupees 30,000 which has no value. But by keeping the amount of compensation at a minimum level the perpetrators take the advantage of that amount. There is a strong demand from the civil society of Pakistan to abolish Diyat but the state and higher judiciary take shelter behind the Islamic teachings and covering it with sacred norms.

If the higher judiciary and particularly Supreme Court does not take notice of honour killings for punishing women to choose their life partners the society will face worst kind of violence in the name of religion. The has to ensure the protection of girls who are under threats. Government must stop the all kinds of Jirgas.

(About the Author: Nida Nida is working on youth issues in Pakistan and is office bearer of Progressive Youth Forum (PYF) Pakistan. She can be reached at: nida@ahrc.asia)