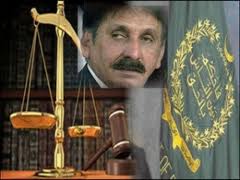 Four hundred and twelve years ago at the stage of Globe Theatre, Prince of Denmark uttered the famous words, “words, words, words”. Since then English Nation has become well familiarized with the phrase. Exactly twelve days ago another prince used the word which has also become well-known in Pakistan. And about four days ago, at a different venue, Prince of Pakistan told the audience that he was surprised that the word “Sharmnaak” which he had used just about four days before that, was used considered a curse word. This surprised many and made many more to ponder upon. Question before the Danish Prince was “to be, or not to be”. Options before this prince will be “to be or not to be (apologetic)” too. But “Curse or not the curse” is query now. Dictionaries are out. Experts are in. Anchors are on. Few calm, fewer clamoring. Each one is giving his or her interpretations. Some believe it qualifies as a curse, others think to do so is Sharmnaak itself. It may not survive as long as Hamlet but surely has given us a chance to dust-up our dictionaries.

This is enticing this debate. There are some points which also need to be considered. Humans have developed the unique art of language for communications. When we speak, there is implicit understanding that

It is impossible for them, and imprudent for anyone to expect them, to have a contractual agreement before they can start talking. Presumptions of both are based upon the specific social surroundings. We all know that many a times when fast friends meet other, volley of very strong abusive vocations ensues. Sometime this involves expressing one’s intent to use other’s   sister, mother or both, in not so savory manner. But instead of loaded arms we see embracing arms. The reason is simple. Literal meanings of used words are different from implied meanings. And both are aware of it. If same two people develop acrimony at some point of life, then very same words may cause mayhem of different sort.

So, in such matters, it is society and not the academia which is the final authority. Academics, dictionaries can define, explain the words but in no way they can limit or “decide” their meanings. It is agreed principle that the people who speak a language, and not the experts, are final adjudicators of rules and regulations of the language.

Many of the words may and have changed their meanings over time. Such meanings sometimes are even opposite to their initial use. Both English and Urdu etc. have many such words. Their current historical/literal/dictionary interpretations are very different from their initial ones. We frequently use the word “terror”. It carries specific meanings. But its connotations are totally different now than it was about two hundred years ago. Till French revolution it has positive connotations. The term “Reign Of Terror” (5 September 1793 – 28 July 1794) was used by revolutionaries themselves. It was meant to create dread in the hearts of antirevolutionary evil persons. This term was used in Pre-Revolution philosophies with those positive meanings. Gradually it started having the current interpretations and meanings. So dictionaries can be guides and not dictators. It does not need to be explained to us what is meant by a “dictator”. It is correct to say that dictators are not as good as they used to be. When Romans faced war like situations, they would ‘elect’ a dictator. He was given the authority to dictate the orders without prior approval of senate. Usually dictators had term of six months. Purpose was to avoid the lengthy procedures and infighting in the senate. It gave dictator full powers for that duration. That is totally different concept from what we know of dictators.

We also know that Catholic priests are addressed as “father, Padre/e”. Padre/Padree is same as father in Farsi. But both Padre and the speaker know that it does not mean a biological father. Hence Padre should not expect speaker’s mother to sleep with him even though dictionary may allow so.

In Urdu etc. too many words are used whose interpretations are different from their literal meanings. Terms Shias, Sunnis and Ahle Hadees, now days, have different meanings than they once had. Both pro and anti Ali (A.S.) were Shias of one or other kind i.e. Shiaan e Ali and Shiaan e Muaawiya. Case of Sunnah is also similar. Each tribe had its own ways of life/traditions called Sunnah of that tribe. I think it was Imam Malik who started the campaign asking tribes to give up their tribal Sunnah and adopt Sunnah of Rasool only. Likewise is the term Ahle Hadees. Hazrat Abdul Qadir Jilani was “Ahle Hadees” of his time. But those Ahle Hadees were totally different from Ahle Hadees of today i.e. Ibne Timiyya followers etc. That group started as reaction to infighting of Muslims of that time. They were very moderates with totally different Sufi like interpretations.

I am not a linguist so I do not claim that this fits to absolute standards of linguistics. Current discourse has political background. Politics is embedded in our psyche. No doubt this talk also tells about our individual/group psyches. I may be wrong but I think this discussion started on August 2nd. This makes one think one other thing. If there was confusion whether “Sharmnaak” was a word of abuse or not, then why there was no discussion between July 26th and August 2nd?  Or: is it right to stare at or  seek someone else’s “Sharm-Gaah” against the wishes of someone?  Someone can ask, “What is right?” The word “right” originated from mother of languages Sanskrit term “Reet”. This is like Riwaaj (custom). We know that not all the Reet/Riwaaj can be right for all the time and at all the places. They also say that what is not right should be left. Leave/left’s origins are also supposed to be from Sub continental languages. It is considered to have originated from Laipaa , like laipaa karna, make gaaraa etc. to stick to wall or left on the wall. Greek adopted it as ‘Lipos (lipid in English)’ for greasy, sticky material. It became Liep and leave/left.  I think I better leave it here.