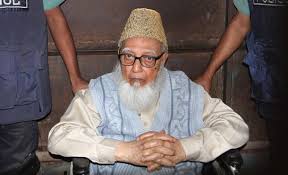 A Bangladesh court has sentenced a senior leader of the country’s largest Islamic party to death for war crimes
committed during the 1971 independence war against Pakistan.

Ali Ahsan Mohammad Mojaheed, 65, was found guilty by the International Crimes Tribunal of five charges, including abduction and murder, and was sentenced to death, MK Rahman, Bangladesh’s junior attorney-general and prosecutor said on Wednesday.

“In three out of five charges he was given the death sentence,” Rahman said after the verdict in the capital, Dhaka.

Mojaheed, the secretary-general of Jamaat-e-Islam, had faced seven charges of murder, mass killing, torture, arson
and abduction during he war of liberation against Pakistan.

The tribunal found him guilty of kidnapping and killing a journalist, a music director and other people.

He had been accused of leading a notorious group that during the war kidnapped and killed many teachers, journalists and writers who supported the cause for independence.

Al Jazeera’s Tanvir Chowdhury, reporting from Dhaka, said that Mojaheed’s son told Al Jazeera that the crimes he was
accused of were politically motivated.

Mojaheed was an influential minister in the 2001-2006 government headed by Khaleda Zia, the present head of the
opposition Bangladesh Nationalist Party.

Bangladesh had shut down for a third straight day on Wednesday, after Jamaat supporters called a nationwide strike over the 90-year sentence given to Ghulam Azam, the 90-year-old spiritual leader of the Islamic party.

Shops and businesses were closed and main roads were largely deserted of cars in the capital Dhaka.

Bangladesh has said that the Pakistani army killed three million people and raped 200,000 women during the war.