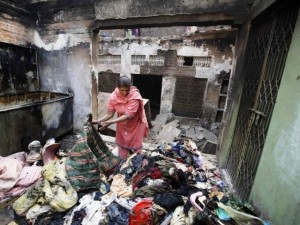 Shumaila, 48, looks through her family belongings at a section of her home, after it was burnt by a mob two days earlier, in Badami Bagh. PHOTO: REUTERS

KARACHI: The Sindh Assembly passed a resolution regarding the ‘misuse of the blasphemy law’ and to condemn the ‘barbaric’ attack on the Christian homes in Joseph Colony, stated a press release on Monday.

The Joseph Colony incident took place on March 8 when over 100 Christian homes were burnt by a angry mob who accused a Christian boy, Savan, of blasphemy. Protests in various cities and compensation by President Asif Ali Zaradari and Sahbaz Sharif followed the incident.

According to the press release Member Provincial Assembly (MPA) Sindh and Chairman, Standing Committee on Minorities Affairs Sindh Assembly Saleem Khursheed Khokhar submitted a resolution in the assembly regarding misuse of the blasphemy law.

“The ransacking and burning on the alleged charges of blasphemy, when no evidence of the witnesses had been recorded and especially when the accused was already in the custody of police, is a distortedly act of terrorism against the Christian Community.”

“Government of Sindh is thus requested to take up the case with the Government of Punjab not only to get the attackers / terrorists punished, but also compensate adequately those victims who suffered mentally and monetarily. It is further resoled that the misuse of the blasphemy laws like 295-B and C of PPC should be restrained and the personal disputes are not converted into blasphemy acts,” the resolution concluded.

After the Sindh Assembly session ended, the MPAs belonging to minority groups stood on the stairs of the assembly to register their protest.