When I was a little girl, I always wanted Bangladesh to be famous. I did not like that whenever people asked me where I was from I would have to explain, “Bangladesh, this tiny country on the East of India.” Why could people not just know where my Motherland was?

At the age of 18 years when I went abroad for college, I discovered that Bangladesh was famous, at least in Charlottesville, Virginia: Famous for floods, cyclones, crippling poverty and dying children.

Now as a long-time resident of the States, I have found that Bangladesh is upheld as an ideal when it comes to development indicators such as reducing maternal mortality ratios, and allowing women to enter the workforce en masse, particularly in our garment sector. 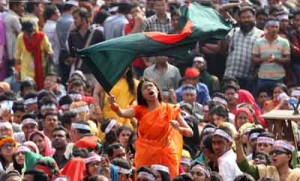 Rising Up: Why Has the International Media Been Largely Silent on Shahbagh? Image Credit: Flickr

Speaking of the garments sector, there is apparently nothing the international media loves more, when it comes to Bangladesh, than factory fires that unfortunately almost regularly sweep through the country. Just look at the example of Tazreen Garments. Late last year when the story broke that major US chains, such as Walmart, manufacture their clothes in cheap labor factories tucked away in the outskirts of Dhaka, the Western press could not get enough.

This story about lack, or absolute absence, of fire safety measures in Bangladeshi garment factories, killing thousands of poor Bangladeshi workers almost annually, was gobbled up by the media. Not a day could go by when the Tazreen garment factory story was not mentioned in the news, and even major American outlets such as ABC and NBC were providing wall to wall coverage on the incident.

Is the West then only interested in press that perpetuates stereotypes of the ‘poor, brown, exploited worker’? Do they not want to hear when we rise up against religious extremism? Why then when the Shahbagh story is unfolding before the world’s eyes, the international media is looking away? Writer, Kachin Gupta ponders in, The Pioneer:

Something remarkable is happening in Bangladesh which has gone under-reported, if not unnoticed, by newspapers and news television channels. What is a pity and a shame is that the international media, which goes into overdrive if 10 people gather at Tahrir Square or a bunch of lazy layabouts decide to ‘occupy’ Wall Street, has missed a story that tells more than one unfolding tale in a country with a bitter past and an uncertain future, a nation whose blood-soaked birth is unparalleled in recent history.

Many experts even state that the gathering in the heart of the capital of Bangladesh, Dhaka is a “social revolution akin to the French Revolution.” For over two weeks, thousands of Bangladeshi youths, organised largely by online activists and bloggers, have been leading a non-violent movement to deny religious fundamentalism a place in mainstream politics, demand death penalty for war criminals, and ban the student arm of the country’s largest fundamentalist party. Bangladeshi writer, Saad Z. Hossain explains what makes the protests in Bangladesh so genuine:

…The significance of Shahbagh is that ordinary people have taken to the streets after a long, long time. This is not about legal arguments, or capital punishment morality, or political manoeuvring towards future elections. I believe deep inside, this is a visceral rejection of fundamentalism, and the end game which Jamaat brings to the table. On some level I think people realize that there is no room for us in the kind of world they want to build. Our people are secular at heart. Our women work. We love music, and dancing. We care about literature, and language. Even with thousands in Shahbagh chanting for death, there is, inevitably, pockets of song and dance and plays, outbursts of the sentimentality which is our national character. We were never meant to be a fundamentalist state. This Jamaat thing is alien, even when perpetrated on us by some of our own. Shahbagh is the silent majority rising up against the use of religion to bully, the issuing of bewildering fatwas, the adoption of Arab dress and Arab ways, the blatant distortion of the past, the peculiar assault on our culture.

The biggest story of an organic movement to resoundingly choose secularism over Islamic extremism is happening in one of the world’s largest Muslim democracies, so why is the world not acknowledging Shahbagh? Why does the majority of international media continue to either ignore the swelling numbers of ordinary Bangladeshis joining the movement, or still wrongly label the gathering in Shahbagh, and across the country, as mass demands for capital punishment? Why as a blogger, and main leader of Shahbagh was hacked to death outside his home, and why as the Government looks to ban the country’s largest fundamentalist party, is the world not paying attention to Bangladesh?

While in America it is sadly quite normal to have the press cover stories of hurricanes and lost pets over major stories happening in the rest of the world, sometimes even in place of wars, it is shocking to see the major global networks overlook Bangladesh’s cultural revolution. Is it because the world is confused by a Muslim country rejecting outright the mullahs and war criminals who have eaten away at our society? Can the Western press only make sense of our movements when we are storming the streets demanding higher wages, or when we’re running around as paid political stooges? Why is the media intentional missing out?

Shahbagh Protests Are Being Organized by Women & the Youth of Bangladesh. Image Credit: Flickr

Perhaps they cannot make sense of Shabagh because it smashes any stereotypes or prejudices the rest of the world may hold about poor, Muslim, ‘developing’ nations. Or perhaps they don’t want to hear our call for justice, real democracy, and secular government.

Whatever shape Shahbagh takes, it is clear that, in the words of famous poet, Gil Scot Heron, this revolution will not be televised, because the world is busy watching other channels.

For now, at least.

Media Blackout: Why Is the World Not Acknowledging Shahbagh?