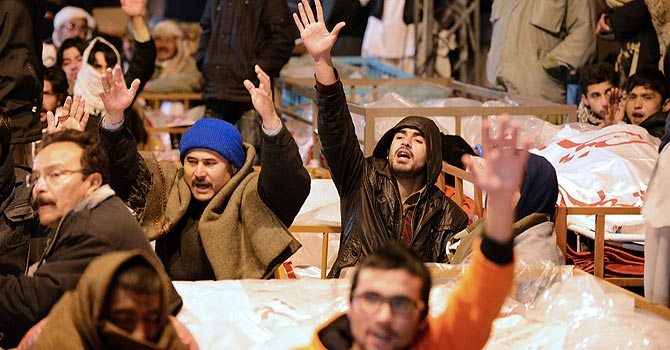 QILA BHATTIAN WALA: In the village of Qila Bhattian Wala, nestled in wheat fields, Shia Muslims know nothing of the record levels of violence suffered by their community elsewhere in Pakistan.

Here 3,000 villagers live in harmony with their Sunni neighbours. They worship at the same mosque, guard each others’ religious processions, grow up together, intermarry and live in peace without fear or retribution.

“I’ve witnessed this Shia-Sunni brotherhood from my childhood, you can say from the day I was born,” Mohammad Bashir, an 80-year-old farmer told AFP in the village, 130 miles (208 kilometres) southeast of the capital Islamabad.

“We are all Muslims and creatures of one Allah,” he added.

On Friday afternoons, Shia and Sunni clerics perform the call to prayer from the same, small mosque with marble flooring. One after the other, Shias and Sunnis make their ablutions and enter the mosque to worship.

“Islam is a religion of peace, so we never say a word in our sermons which can create trouble for others,” said Maulana Zille Hasnain, a Shia prayer leader.

But in parts of Pakistan, that is no longer the case.

A devastating twin suicide attack killed 92 people in the Shia Hazara neighbourhood of Alamdar Road in the southwestern city of Quetta on Thursday.

It was the worst single attack on Shias in Pakistan and came after what Human Rights Watch (HRW) said was the deadliest year on record for the country’s Shias, with more than 400 people killed in 2012, mostly in drive-by shootings.

Activists accuse the government of failing to protect Shias, who account for 20 percent of the 180 million population, and say the perpetrators operate with impunity because the judiciary fails to prosecute the culprits.

“The callousness and indifference of the authorities offers a damning indictment of the state, its military and security agencies,” said HRW Pakistan director Ali Dayan Hasan in a statement.

The worst of the violence has been in Quetta, Karachi, the tribal town of Parachinar and the northern district of Gilgit-Baltistan where in 2012 Shias were pulled off buses and shot dead.

The Shia Hazaras, an ethnic group that suffers chronic discrimination in Iran, as well as Pakistan, have been hit disproportionately with around 100 killed last year.

Lashkar-e-Jhangvi (LeJ), Pakistan’s most extreme Sunni terror group, claimed responsibility for the Quetta attack and is blamed for much of the violence.

LeJ is linked to both Al-Qaeda and the Pakistani Taliban, Sunni fundamentalists who have fought an insurgency against the government since 2007.

“Whether the military’s inability to crack down on them is a capacity issue or it is ideological – this is a moot point,” Hasan told AFP.

In July 2011, Pakistan released LeJ leader Malik Ishaq, who spent 14 years in custody over dozens of sectarian murders and who is accused of masterminding a 2009 attack on the Sri Lankan cricket team.

Ironically, some Shia political leaders have called on the army to intervene where the civilian government, which is this March set to become the first ever in Pakistan to complete a full term in office, has failed.

“We are living in times where a civilian government can’t save us. It is time for Pakistan’s army to safeguard the country’s borders and save its innocent citizens,” said Mirza Yousuf, head of the Pakistan Shia Action Committee.

“It’s something we never had… If you want to believe in conspiracy theories, a deliberate attempt is being made to create this division in Pakistan,” he said.

He added that there were only “a very small handful of people who believe Shias are heretics”, but that it was “impossible to guard and protect every inch of this territory”.

Many observers in Pakistan say opinion polls are unreliable. But according to one recent survey by the Pew Research Center, 37 percent of Pakistanis do not recognise Shias as Muslims.

For families bereaved by the bloodshed, there is bitterness. Shia relatives have been refusing to bury their dead from the Quetta bombings and are protesting, demanding the army take over security.

Sahib Jan, a Hazara woman in Quetta, always worried that her husband Mohammad would be killed. He laughed it off but on October 16, her worst nightmare came true.

He and his younger brother were gunned down in their tyre shop by attackers who also killed two other Hazaras in the area.