Home  »  Blogs Cross posted   »   Was Benazir Bhutto a victim of the system?‏ -by Ammara Ahmad 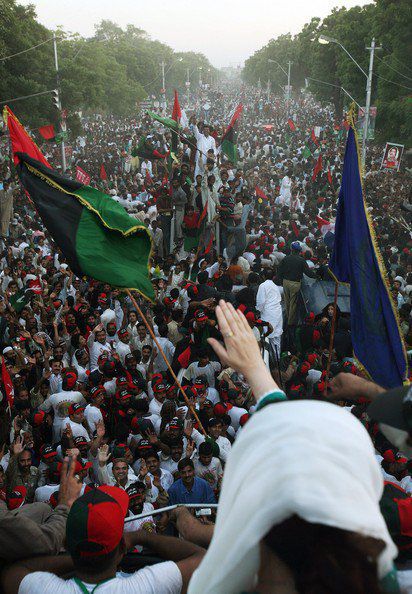 Benazir Bhutto was arguably one of the most powerful people in Pakistan. She was Pakistan’s first woman prime minister and the head of its largest political party gunned down by extremists in 2007.

As the world mourned the fifth anniversary of her death yesterday, we look back at her tremendous journey, the successes and failures.

To many outsiders, Pakistan is a difficult country for women.

Having lived there all my life, I agree with them. Women find themselves threatened in public spaces.

The conservative ideology which guides the country is against sharing this space with women. This is the legacy of Zia-ul-Haq – Pakistan’s notorious dictator and father of extremist politics.

Benazir, commonly called BB in Pakistan, often said there are powers within Pakistan’s government that don’t want the Pakistan People’s Party (PPP), the party which she led, in office. Earlier this year, the Mehran Bank Scandal lend credence to this theory.

It was discovered that Mehran Bank owner Yunus Habib had publicly declared that he had received funds from Pakistan’s intelligence agency to prop up opposition parties (mostly right-wing) to oppose the PPP, which Benazir led.

PPP was forced out of the government by a motion of no-confidence twice in 1990 and 1996.

How path to politics opened

Now more than ever, in the light of this scandal, I wonder if Benazir was more of a victim of this system.

Benazir wanted to study psychology at Radcliffe University, but her father Zulkifar Ali Bhutto convinced the institution to change her major to comparative politics.

And after her father’s government was dissolved by Zia, she became active in Pakistani politics. After her father died, she assumed the role as PPP’s leader.

It is one thing to be hailed as the first female Muslim head of the government and to rise to the helm of a patriarchal society.

It is another story to actually go to a procession in Hyderabad or Larkana, among hundreds or thousands of men in the scorching heat. And to do this regularly, while still tending to a young family and facing constant death threats.

There are always rumors about politicians, but the ones spread against her were always explicit, abusive and contained sexual innuendoes. There was always a silent expectation that this or her family would force her to retire.

When Benazir was abroad, she had time to reflect and grow, resulting in the signing of the Charter of Democracy with arch-rival Nawaz Sharif in 2006.

She realised that if democracy is to be restored, both the major opposition parties must join hands and return to Pakistan together against the Pervez Musharraf dictatorship in Pakistan. She realised that warring political parties gave the military a ticket to power.

She flew to Jeddah to meet Nawaz and this formed the basis of the Pakistani politics today. And it was a big move on her part, considering most of the graft cases against her and her husband, were filed by Nawaz’s party.

Turning into a target

Musharraf had ousted Nawaz in 1999 and bent upon keeping him out. But Nawaz himself has stated that Benazir wanted him and his brother to return.

Her wish to interact with the public, hug poor women and wave at the crowds always over-powered her.

But the Pakistan she returned to in 2007 was different from the one in the 80s.After she clarified that she will crack down on the Taliban, she became a target.

The 18th Amendment, which reduced the powers of the president in Pakistan, that the treasury and opposition will decide the chief election commissioner, more autonomy for provinces and the removal of General Zia’s name as Pakistan’s president.

The 18th Amendment is controversial and has several problems but is arguably the most liberal constitutional amendment ever made in Pakistan with consensus among different opposition parties. The grounds of this consensus were laid by Benazir through the Charter of Democracy.

She was a papa’s girl till the end, often breaking into tears when narrating her father’s last days. When she took over as chairperson of PPP, her mother hoped she would step down and her brother would take over.

Eventually her mother campaigned for her brother, but later moved in with Benazir in the Prime Minister’s House because she was sick.

Her brother and political rival was killed during her second term as prime minister. Her husband, Zardari (left), was accused of her brother’s murder.

Her husband had become known as ‘Mr 10 percent’ because of his susceptibility to bribery.

He also refused to live with Benazir in the Prime Minister’s House.

The relationship was tumultuous, because he had never expected that his wife would become the prime minister.

Benazir had an emotional separation from her children when she returned in 2007. British journalist Christina Lamb was with her when there was a suicide attack on her welcoming rally.

She reported that the next day, Benazir told her that the first thing she thought after the explosion was her children.

She enjoyed organising picnics for them and feared that they were too young to lose a parent.

In a culture where women are treated like delicate flowers during pregnancy, Benazir first hit the campaign trial with her child in her womb and was in office when her second child was born.

One of her colleagues once said that after her husband was arrested on a corruption charge, Benazir was at a rally and pregnant.

Party workers were asked to cover her abdomen in case of police attacks.

This was just one example of her courage which impressed Christina Lamb, Christopher Hitchens, Gordon Brown, Hamid Karzai, and her friends and opponents alike.