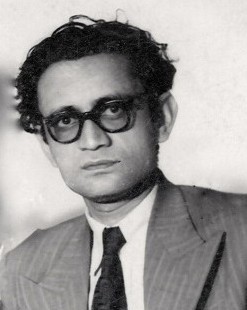 Born and raised in a village a few kilometers from Samrala Town, District Ludhiana on the Indian side of Punjab, the late Saadat Hasan Manto (1912 to 1955) left us horrified, speechless and even offended while he scribed for the world the depths of depravity, uncertainty and the many ironies encountered during the partition of British India (into the independent states of India and Pakistan) in 1947.  For one of the greatest Urdu short story writers the world has ever known (if not the greatest as he described himself), the personal journey was as troubled as the time in history he drew inspiration from. Manto died in Lahore at the young age 42 but not without sharing his genius.

Since 2012 was heralded as the Manto centenary year, this scribe just could not let it close without saying some sort of goodbye. Being weak in Urdu script reading does not help matters here but thanks to translations of his writing by other people who have had a strong command of both the Urdu language and English (like the late Khalid Hasan amongst others), Manto Sahib has never been a stranger. Thanks are also in order to a television series called Mantorama on PTV during the early 1970’s for capturing our collective imagination.

The attention that Manto has been getting this year has some much older beginnings which include his stints in Bombay’s nascent film industry and post partition Lahore. But this has also been the year that the three daughters of Saadat and Safiyah Manto, namely Nighat, Nuzhat and Nusrat finally visited his birthplace in India to a warm welcome. Their father also had an Aligarh Muslim University connection since he did attend that unique house of learning for a short time. It has been reported that he was initially inspired into the writing field by one Abdul Bari Alig an author and a historian himself who introduced young Manto to the works of western authors. Manto started off by translating Victor Hugo’s The Last Day of a Condemned Man into Urdu which was published in Lahore, launching him into the realm of Urdu writing.  He also translated Oscar Wilde and works of Russian writers but his own stories soon became a passion in the process.

In a way this article is an attempt to stir up some more reader interest in this Urdu writer whose intensity of portraying some of the grimmest aspects of south-Asian life remains unparalleled. What Manto did was something quite revolutionary in Urdu literature. He took symbolism and threw it out of the window and minced no words to hide what happened to people (especially women) during 1947. He described the rape and murder committed in the name of religion just like it occurred. Many people who once lived together in the same community and happened to be Hindu, Muslim or Sikh suddenly ceased to be human. Some almost became beasts when the forces of history marched on. Manto Sahib in the process of detailing this descent into madness and its aftereffects ended up defending himself against many cases of obscenity leveled against him in the new country of Pakistan (which he opted to move to in 1948). Urdu literature especially its poetry, has always been well known for projecting profound thoughts wrapped in veiled and very symbolic clothing. Manto made the “error” of taking off this clothing completely in his writing (sometimes quite literally as in his story Khol Do). He also ran into a wall of people in two new countries (India and Pakistan) who wanted to hide under the rug what they once did to each other and move on. Manto, unfortunately for them, was not one to forget. 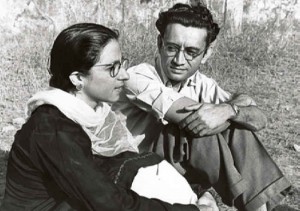 (Manto with his wife)

Saadat Hasan Manto wrote about strange intimacies long before it became an acceptable norm even in the western world. His “Bu” (Smell) created a stir in pre-partition India. Later in a writing titled “Thanda Gosht” (Cold Flesh) he almost ventured out into the topic of necrophilia which generated the wrong kind of attention and won him a long trip to the courts for obscenity. Besides this topic, there is plenty of murder in Manto’s writings since the late 1940’s were quite a murderous period in British Indian history, especially in the Punjab.

Manto was deemed both an opportunist by left leaning progressives and a troublemaker by the conservative establishment in the new Pakistan. India took him off the radar too for quite some time (but he was not totally forgotten). His once famous “Letters to Uncle Sam” were both witty and sarcastic but he was not as opposed to America as many of his contemporaries. By the time that he died Sadat Hasan Manto has offended and irritated just about everybody that mattered. But whose side was he really on? The answer might be that he always championed residual humanity. The term “residual” here is applied to those of his characters who were already downtrodden, violated, dispossessed, brutalized or the perpetrators of many sins, yet bewildered to discover that they still retain some leftover qualities that human beings just cannot completely let go of.

The last big reason which caused this scribe to access the keyboard here to write about Saadat Hasan Manto has to be his masterpiece “Toba Tek Singh” which ridicules the attempts which were made to partition everything in 1947 between India and Pakistan (during which hundreds of thousands perished). Manto’s fictional insane asylum Toba Tek Singh too is partitioned with Hindu and Sikh residents being forcibly transported out of Pakistan. The questions seriously asked in this particular writing of Manto’s are, how does one really go about partitioning insanity and why? 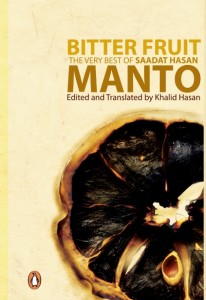 The Manto centenary recently celebrated should encourage Indians and Pakistanis to read and in the process rediscover Saadat Hassan Manto for themselves, even if it is in translation. Let us not just celebrate and forget his 100 years (many of which were spent in controversy), but use his works today to look back at our beginnings and find in them some food for thought for the future of the south-Asian region.