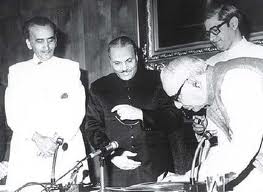 If you, like me are born in the 80’s. I already feel sorry for you, in fact I feel extremely sorry for you. You can not even imagine what you have missed.

Yes, indeed there was another Pakistan. A Pakistan without the extremists, without the dogmatist’s, without the Blasphemy Law’s. But, the problem you see is that the majority of my fellow generation, does not realizes what it has missed. Like a fish born in a tank, will always picture the Worlds existence as a tank “forever and after”.

For it, the World was, is and always will be that tank, no matter how gloomy, how abnormal it might be. The movement of 68-69, the bars, the extravagant personalities, the poetry, the music, the charismatic personality of Bhutto, the art and the general openness of our society etc, they are not familiar with that World.

Ours has been a World of the Dollar Jihad, the ideologically impotent policies taken by the Pakistan Peoples Party after Zia’s end in the late 80’s. A party that was created and based on Socialist lines siding with compromises and “pragmatism” rather than the revolutionary ideology of Zulfikar Ali Bhutto, which eventually led to the downfall of what could have been another revolutionary wave and turned out to be the return of the monopolized military/bureaucratic anti democratic culture, utilising  Blasphemy law’s, the Hathora group, the racial, sectarian violence, gang rapes, target killings, “collateral damages” drone attacks, military operations, the Afghan war and the drug trade along with the “Kalashnikov culture” sponsored by it to maintain it’s grip and to crush any recoil of the another people’s uprising.

The social order seems and is sick to the core, majority of Pakistani’s it seems is living in the stone ages, the bail gari’s etc, our daily lives presupposed to follow a Saudi sponsored dogmatic fundamentalist outlook. Things that should have been obsoleted ages ago, but they were not and the way things are going, there seems to be no hope of anything changing in the coming days. With the current political scenario, it’s no surprise that the only democratic party of Pakistan is failing to solve any of the fundamental problems faced by Pakistan today, it is due to the shackles of a sickly Capitalism and it is no surprise the way things are going, Pakistan People’s Party needs a radical ideological and structural change  and to adopt Socialist mode of economy  as it is in it’s manifesto.

Only then, can these problems born out of the 80’s be eradicated and the generation born in it, can breath and prosper in a free environment and a social order meeting the challenges of the 21’st century be created from ground level.