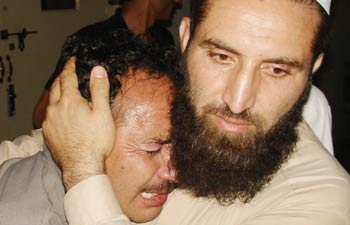 Gunmen forced 25 Shiites Muslims off buses in northern Pakistan and killed them.

The tyres of the Landcruiser squealed wildly as Gul Khan slammed the brake pedal. My head crashed against the dash board. “Sir, get out of car,” my driver, Khan, 41, shouted frantically. “Please hurry up,” he said as he jumped into a nearby ditch. I followed him. Seconds before jumping into the ditch, I heard the rat-a-tat burst of AK-47s. On the road ahead, four masked men sprayed bullets at a line of over 20 bus passengers. The assailants were masked. They were flanked by a dozen armed men. It was 5.45 am. We were at ‘Thanda Pani’ 180 km east of Gilgit.

The attackers stopped the buses at gunpoint and had segregated the Shiites. They had offloaded their hapless victims from three buses of the Mahfouz Travel Company that plies buses between Rawalpindi near Islamabad and Gilgit, the capital of Gilgit-Baltistan province. They checked the identification of their vicitms and then shot them. It took them nearly half hour to do so.

The attackers pushed the dead bodies into a nearby ditch. The attackers, interestingly, did not hurt the other passengers. They shouted at the bus drivers to move on. Another Kalashnikov-toting gunman walked down the line and ordered the other vehicles to start moving. We emerged from the ditch, jumped into our vehicle and drove away as fast as we could. “Investigations are underway to establish the nature of the attack,” a senior police official told me in Gilgit. “However, keeping in view past incidents, this appears to be an incident of sectarian violence,” he told me. The victims, he said, were traveling from the garrison city of Rawalpindi to Gilgit, a Shiite majority area. On February 28, masked men pulled 18 Shias out of buses and gunned them down in Chilas town.

Fear and anger have gripped Gilgit city after the massacre. The market is shut and paramilitary forces could be seen patrolling the provincial capital of newly formed Gilgit-Baltistan province. The attack, came Muslims prepared to celebrate Jumatul wida – the last Friday of the Islamic holy month of Ramadan, which is sees large gatherings of friends and family.

“Such incidents are not new here,” says Manzar Shigri, a prominent local journalist. “There have been several such attacks in the region in the past carried out by Sunni extremists who do not view Shiites as true Muslims.”

Many fear the fresh incident of Shiite killings could provoke Shiite protests on Friday, and increase sectarian tension across the country.

On 30th August, 2012, federal Interior Ministry of Pakistan had warned the home department of the province that extremists could target Shiites returning home during Eid holidays. On August 5, extremists bombed a passenger van on 5 August, 2012 and killed one person and wounded five persons near Gilgit. The van had left Islamabad and was 10 km away from the provincial capital.

Thursday’s killing of Shias coincided with the attack by Pakistani Taliban on the Kamra Airbase’ 55 KM away from Islamabad to West. Eight Taliban militants entered most important airbase in the early hours of Thursday, killed a security official and wounded five including commander of base. Kamra houses both Pakistan’s biggest airbase and an aeronautical complex that produces fighter aircraft like the J-F Thunder.