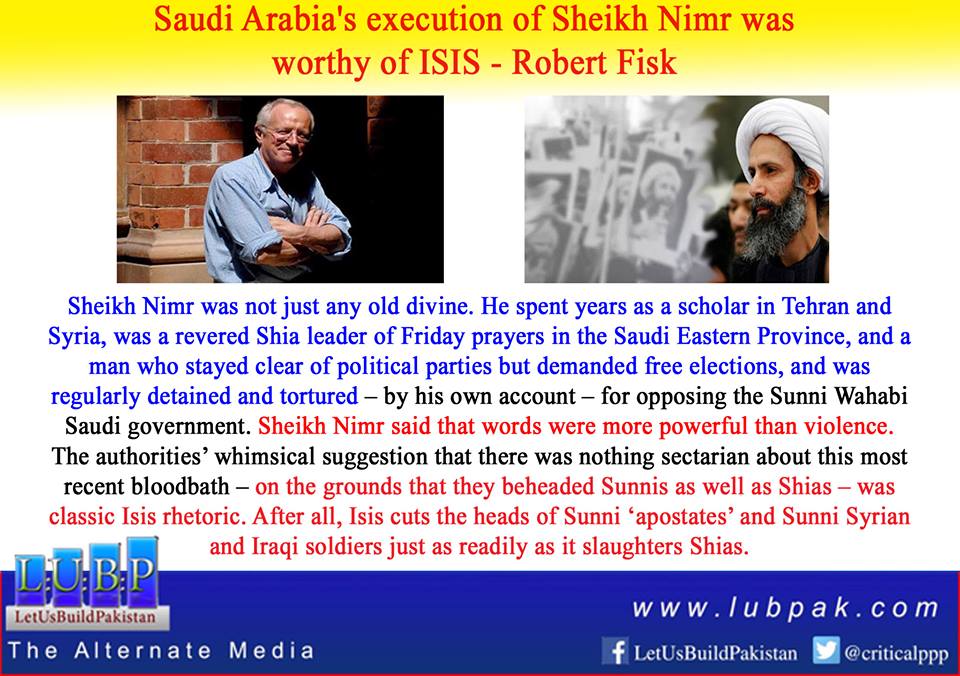 Saudi Arabia’s binge of head-choppings – 47 in all, including the learned Shia cleric Sheikh Nimr Baqr al-Nimr, followed by a Koranic justification for the executions – was worthy of Isis. Perhaps that was the point. For this extraordinary bloodbath in the land of the Sunni Muslim al-Saud monarchy – clearly intended to infuriate the Iranians and the entire Shia world – re-sectarianised a religious conflict which Isis has itself done so much to promote.

All that was missing was the video of the decapitations – although the Kingdom’s 158 beheadings last year were perfectly in tune with the Wahabi teachings of the ‘Islamic State’.  Macbeth’s ‘blood will have blood’ certainly applies to the Saudis, whose ‘war on terror’, it seems, now justifies any amount of blood, both Sunni and Shia. But how often do the angels of God the Most Merciful appear to the present Saudi interior minister, Crown Prince Mohamed bin Nayef?

For Sheikh Nimr was not just any old divine.  He spent years as a scholar in Tehran and Syria, was a revered Shia leader of Friday prayers in the Saudi Eastern Province, and a man who stayed clear of political parties but demanded free elections, and was regularly detained and tortured – by his own account – for opposing the Sunni Wahabi Saudi government. Sheikh Nimr said that words were more powerful than violence.  The authorities’ whimsical suggestion that there was nothing sectarian about this most recent bloodbath – on the grounds that  they beheaded Sunnis as well as Shias – was classic Isis rhetoric.

After all, Isis cuts the heads of Sunni ‘apostates’ and Sunni Syrian and Iraqi soldiers just as readily as it slaughters Shias. Sheikh Nimr would have got precisely the same treatment from the thugs of the ‘Islamic State’ as he got from the Saudis – though without the mockery of a pseudo-legal trial which Sheikh Nimr was afforded and of which Amnesty complained.

But the killings represent far more than just Saudi hatred for a cleric who rejoiced at the death of the former Saudi interior minister – Mohamed bin Nayef’s father, Crown Prince Nayef Abdul-Aziz al-Saud – with the hope that he would be “eaten by worms and will suffer the torments of hell in his grave”. Nimr’s execution will reinvigorate the Houthi rebellion in Yemen, which the Saudis invaded and bombed this year in an attempt to destroy Shia power there. It has enraged the Shia majority in Sunni-rules Bahrain. And Iran’s own clerics have already claimed that the beheading will cause the overthrow of the Saudi royal family.

It will also present the West with that most embarrassing of Middle Eastern problems: the continuing need to cringe and grovel to the rich and autocratic monarchs of the Gulf while gently expressing their unease at the grotesque butchery which the Saudi courts have just dished out to the Kingdom’s enemies. Had Isis chopped off the heads of Sunnis and Shias in Raqqa – especially that of a troublesome Shia priest like Sheikh Nimr – we can be sure that Dave Cameron would have been tweeting his disgust at so loathsome an act. But the man who lowered the British flag on the death of the last king of this preposterous Wahabi state will be using weasel words to address this bit of head-chopping.

However many Sunni al-Qaeda men have also just lost their heads – literally – to Saudi executioners, the question will be asked in both Washington and European capitals:  are the Saudis trying to destroy the Iranian nuclear agreement by forcing their Western allies to support even these latest outrages? In the obtuse world in which they live – in which the youthful defence minister who invaded Yemen intensely dislikes the interior minister – the Saudis are still glorying in the ‘anti-terror’ coalition of 34 largely Sunni nations which supposedly form a legion of Muslims opposed to ‘terror’.

The executions were certainly an unprecedented Saudi way of welcoming in the New Year – if not quite as publicly spectacular as the firework display in Dubai which went ahead alongside the burning of one of the emirate’s finest hotels. Outside the political implications, however, there is also an obvious question to be asked – in the Arab world itself — of the self-perpetuating House of Saud:  have the Kingdom’s rulers gone bonkers?