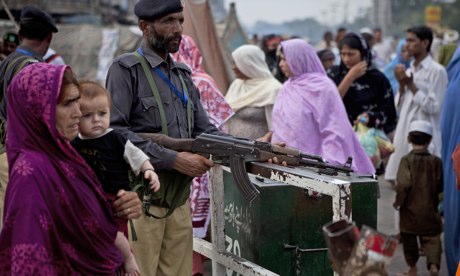 Radical itinerant preachers, a boom in hardline madrasas and militant attacks on the shrines of holy men are driving adherents away from Pakistan‘s Sufi-influenced Islamic tradition, according to concerned religious leaders in the country.

They say the broad ideological assault on Barelvism, the moderate form of Islam that Muslims in south Asia have followed for centuries, is making it ever harder for Pakistan to confront extremism and terrorism.

In Jhelum, an unremarkable district in the centre of Punjab province, Barelvi leaders say young people in particular are receptive to the messages of hardline sects, many with strong doctrinal and financial ties with the austere Wahhabism of Saudi Arabia. Wahhabi Muslims regard Barelvi practices as little short of blasphemous.

“What these people are doing is wrong because when they come here they are not worshipping God, they are worshipping a saint,” said Imtiaz Malik a 19-year-old who has given up going to the Baba Jee shrine, on a backstreet of Jhelum city.

The unprepossessing building is just one of hundreds of thousands of shrines across the country that attract devotees who believe a prayer at the grave of a saint will bring them health and happiness.

Malik now rejects the practice even though the saint at Baba Jee was his great-aunt, a woman whose virtuous life led local people to revere her as holy.

Now, he identifies with Deobandism, an ultra-conservative and puritanical school of Islam that emerged in mid-19th-century India.

When not teaching special English classes to applicants for UK marriage visas, Malik spends much of his time just a few streets away from his family’s shrine, at a complex owned by Tablighi Jamaat, a missionary organisation that targets its activities on traditional mosques.

“Eventually, we hope there will be no Barelvis left,” said Ali Abbas, a senior member of the order in Jhelum. “In 1926, we were just one man; now, we are hundreds of thousands.” 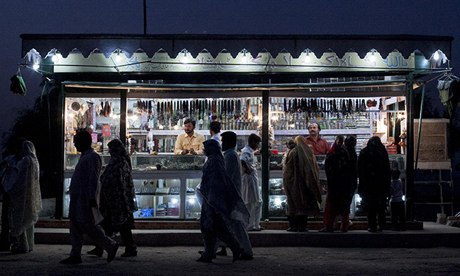 A shop selling strings of prayer beads, caps and traditional shawls at the shrine of Sufi saint Shah Rukn-e-Alam in Multan. Photograph: Mian Khursheed/ReutersMost observers say the Deobandi and similar sects, such as the Ahle Hadith school, have a long way to go before finally usurping Barelvism, which still commands majority support.

But critics say the rapid rise of these sects is fostering intolerance against minorities and other forms of Islam, and can even act as a conduit towards militant groups such as the Taliban, one of the many militant movements that adheres to Deobandi ideas.

“It amounts to ideological brainwashing of a country,” said Waleed Ziad, a researcher from the World Organisation for Resource Development and Education (Worde). “Takfirism [the tendency of hardliners to declare followers of other sects unbelievers deserving death] is rapidly eroding Pakistan’s social base”.

To the west, in Jhelum city’s rural hinterland, some Barelvi practices remain strong. One neatly tended complex boasts gardens and an aviary of rare birds, another the promise of boosted fertility for women struggling to conceive. The Pir Khara shrine can be reached only down a single, shattered road, but thousands of people pour in on special days to collect water from a spring said to have healing powers.

A small cable car winches those unable to walk to the top of hill. Dozens of shops have sprung up around the otherwise isolated shrine, creating a long bazaar where worshippers can buy bracelets and trinkets to use as offerings or souvenirs.

It is these mini-economies associated with the shrines that make them controversial among their opponents, who argue that rich shrine custodians who inherit the sites cash in on the credulity of uneducated people. 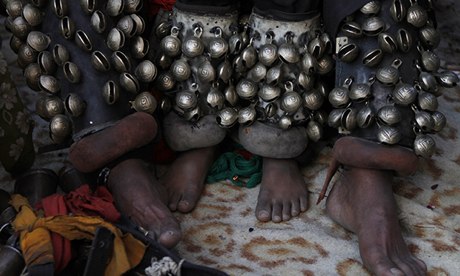 Pakistani devotees wait for their turn to dance wearing Ghungroo (small metallic bells) at a shrine to a Sufi saint in Lahore. Photograph: K.M. Chaudary/AP”They are selling Sufism. I don’t deny it,” said Peer Mudassir Syed Nazar Shah, a custodian and businessmen who uses the language of enterprise to describe the rapid shrinking of Barelvism’s “market share”.

“There are corrupt custodians. Our religion is the product, and it is not bad, but the shopkeeper is bad. This is one reason why people are joining the hardliners.”

Some shrines have responded to the relentless criticism from their opponents by changing longstanding customs, cutting back on the beautiful devotional music for which Sufism is famous and enforcing gender segregation.

Another shrine in rural Jhelum sits in a gloomy room atop a hillock in the middle of empty countryside, where worshippers believe that rubbing the black, sooty residue from the oil lamps around their eyes will improve their sight.

But the challenger sects have become highly adept at offering people much more than the mere hope of miraculous healing.

“We have done more than 400 eye operations in the last year,” says a beaming official from an Ahle Hadith organisation in Jhelum City. “We do regular eye camps, going into the countryside with doctors and treating the people.”

There are many cases of radical mullahs giving cash handouts to poor families struggling to get by; in return, the recipients must agree to switch their allegiance to a hardline mosque.

“The future generation is in danger because Ahle Hadith give widows and orphans money in exchange for their faith,” said Maulana Hafiz Hadim, a senior Barelvi cleric in Jhelum city. 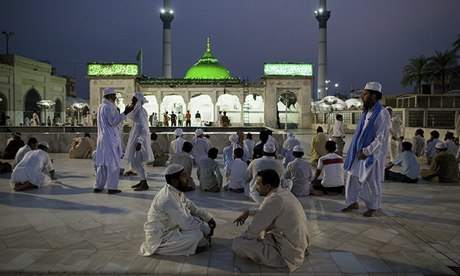 Devotees mingle after paying their respects at the Data Ganj Baksh Sufi shrine in Lahore in July 2010. Photograph: Daniel Berehulak/Getty ImagesThe Ahle Hadith organisation Jamaat-ud-Dawa is banned, subject to UN sanctions because of its links to terrorism, including the 2008 Mumbai attacks. But it has successfully promoted itself as a high-profile national social welfare organisation. Great effort is put into educating Pakistan’s massive youth population.

“Half of the students here are from Barelvi families,” said Mohammad Abdullah, a senior teacher at the vast Ahle Hadith madrasa in Jhelum city. “We focus education on them because in time the children urge their parents to convert.”

Barelvi mullahs say they cannot compete with the financial resources gifted from Saudi Arabia, which regards supporting such movements in Pakistan as a religious and strategic duty. The cash allows for the construction of gleaming new mosques and large madrasas.

Hadim has led the fightback against numerous attempts by hardliners to seize control of Barelvi mosques.

“They infiltrate the local mosques and get their imam appointed,” he said. “Or, where a community can’t afford to pay their mullah’s salary, they offer to pay and then capture the mosque.”

In other parts of the country, the process is less gentle, with radicals mounting violent takeovers of mosques and madrasas. More than 20 shrines were bombed in 2012, particularly in the restive tribal areas bordering Afghanistan, where militants have dug up saints’ graves and physically destroyed shrines.

Suicide bombers at major shrines have attacked the mass gatherings of devotees, who flock to hear music and drumming and to meditate, sometimes with the assistance of cannabis.

A report last year by Worde said attacks on such “anti-Taliban institutions” had prompted people to stay away.

“To protect themselves, moderate shrines and mosques have become so heavily fortified that attendance is at an all-time low,” it said.

The Barelvi, who are followers of a broad set of traditions rather than a movement as such, have struggled to push back.

“Gathering them is a real problem because they all think they are leaders,” said Peer Mudassir.

One attempt to form a political movement – the Sunni Ittehad Council – suffered a setback after conservatives rushed to embrace hardline positions over Pakistan’s controversial blasphemy laws, which critics say have been used to persecute minorities.