Editor’s note: Opinion is not in line with LUBP editorial board. However we respect the right to free speech and respect dissent.

Few years back, when I was a school student and a good listener of music, I was a big fan of guy named Shehzad Roy, a young and dynamic musician with great looks and voice. His songs were my favorite ones like “Dholna”. After few years he became a big Pakistani Pop star. Shehzad is the guy who sung the Kalam-e-Iqbal “Khudi ka sirre nihan- La ilaha illalah” and after listening that song there is lot of respect for him in my heart and then he established an NGO for the betterment of education in Pakistan. It seems OK. Everyone appreciated him a lot but now in 2013 he come back with the new vision and agenda.

On March 2, 2013 I watched his program “Chal Parha” a documentary series about the Pakistani education and schooling system. In the previous episodes of the series, he analyzed and identified various points where our education system lacks, like financial problems, lack of proper funds, proper training of teachers and other things. It sounds good to me and I appreciated his efforts. but the last episode was about the curriculum.

As a teacher I know that our curriculum has not reviewed and redesigned time to time according to new trends. I always criticize it during my lectures in-front of my students and other meetings with other educationists and board officials.

In the above mentioned episode of Shehzad’s documentary series he mentioned some points to be noted by the official to improve the curriculum. Some points are:

Ok, all points are valid and acceptable but I am concern about the next point and that is:

What does he mean by discriminatory contents based on gender and religion and twisted history? Simple answer, to secularize the education system of Islamic Republic of Pakistan, got it?

I watched the entire episode and Shehzad only spoke about the religious topics in text books. He mentioned chapters about  our great heroes of our glorious past in our Urdu and English text books. Even he mentioned about the a chapter about Allama Iqbal and highlighted the paragraph about the views of Allama Iqbal about “Two Nation Theory” and declare it as “Hate Speech” against minorities. 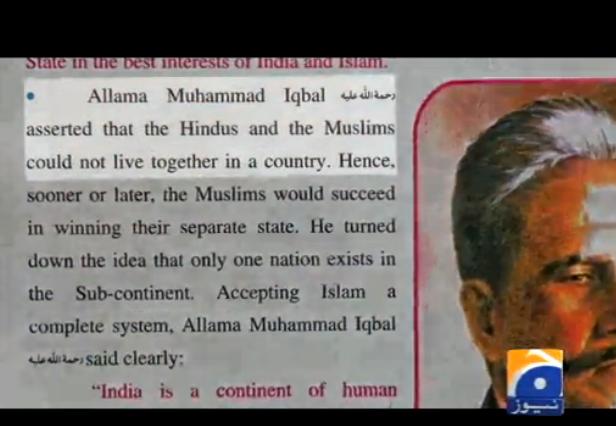 He forgot that we, Muslims were the minority in united India and still Muslims are the oppressed minority there. The creation of Pakistan was necessary to maintain our dignity and religious identity and our new generations should be taught the Ideology and history about the creation of Pakistan (Importance of Two nation theory).

I could not find any chapter based on gender discrimination in our text books.

He asked about the subjects Urdu and Social Studies that why topics based on religion are included in them. He demanded to eliminate the chapters about the historical Muslim personalities and our war heroes. I don’t know what is the matter with these type of people, why are they so allergic to Islam and Islamic history and the Ideology of Pakistan. The text books are the main source of building up the mind set of a child and a child should be taught about his history and religion and this is the universal rule in education. When I was a kid I learned about the Greek mythological characters “Atlas” and “Samson” in my English book published by Oxford press. On the same series of English books, I read about the stupid fairy tales like “Little Red riding hood”, “Hansel and Gretal”, Pied piper and so on.

Why should our children read about the stupid Greek mythology and nonsense fairy tales instead of our Islamic history?

The another concern of the Mr. Roy is that our books teaches about wars and war heroes a lot. In his little understanding of history, people like Haider Ali, Tipu sultan, Muhammad bin Qasim, Mehmood Ghaznavi, Sultan Salahuddin Ayubi and many others are the war lords and they have nothing to do with the peace, prosperity, harmony and progress and the chapters about them should be eliminated from the text books because these chapters are promoting violence.

Shehzad, go to America and remove all the material regarding the American revolution ,War of Independence and French revolution from the curriculum. Because Pakistan did not invade Afghanistan, Iraq, Lebanon, Libya, Vietnam, Korea and many more and killed hundreds and thousands of people all over the world.

Mr. Javed chaudhry said that we should teach our students that we wanted freedom and we achieved that goal but don’t tell them why we want the freedom and making of Pakistan i.e Ideology of Pakistan. How stupid is this.

And about the twisted history. Shehzad claimed that twisted history is being taught by our text books. Who the hell is he to decide that the written history is twisted. People like him are twisting the history to achieve their agenda. They are demoting Muhammad bin Qasim and promoting Raja Dahir. These people are stupid enough to understand that we are Muslim today because of the Great Muhammad bin Qasim.

In April 23, 1999 a conference was held in Berlin, Germany. In this conference a deceleration was released and purpose of that was Global wholesome, Global unity and Global mutuality.

It was declared that we should concentrate on the primary and secondary education.

A system should be developed that should have the same principles and morality. For this purpose the NGOs should be brought forward that are based on the western donations. And now Pakistani media is also well funded to achieve that goal. The Agha Khan board was formed also for the same purpose.

It is all about to secularize the Pakistani in every aspect. Americans and Europeans are spending billions of dollars in the form of funds given to the NGOs, Schools and Electronic and Print media to wipe out the principles of  religion from our lives and control our minds.

Shehzad should try to reveal the hidden secret of “Khudi”.